Creating an Ironman composite shot on the Canon 5DSR 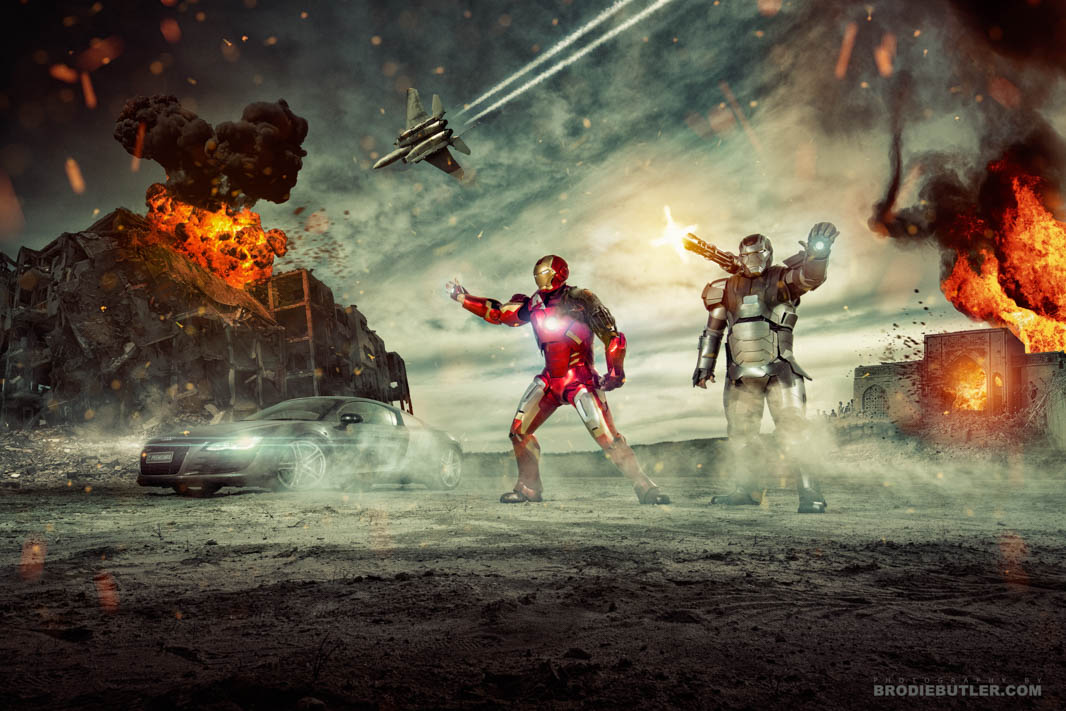 Back in June when I was lucky enough to get my hands on one of the first Canon EOS 5DSR cameras before its release thanks to Canon Australia and Camera Electronic, one of the photoshoots I organised was this creative one with Ironman and War Machine. Not only that but we managed to get our hands on an Audi R8 as well. For the hardcore dedicated Ironman fans out there you will probabaly notice the suits and the car don’t align perfectly with the films but we managed to do a pretty good job of getting the gist of it.

Read on to see the original shot, some behind the scenes and a speed retouching video of how this was created in Photoshop!

So here’s where we started. Out in the middle of nowhere on a big sandy area. I envisioned a bit of a battlefield for the end result so this was the perfect setting. The trees weren’t a big concern, they could easily be removed later.  The cloudy sky was great to help add a bit of drama and build on the smokey atmosphere typically associated with a war zone. Here is the original shot straight out of camera with just a few very sublte lightroom adjustments. (click to enlarge) 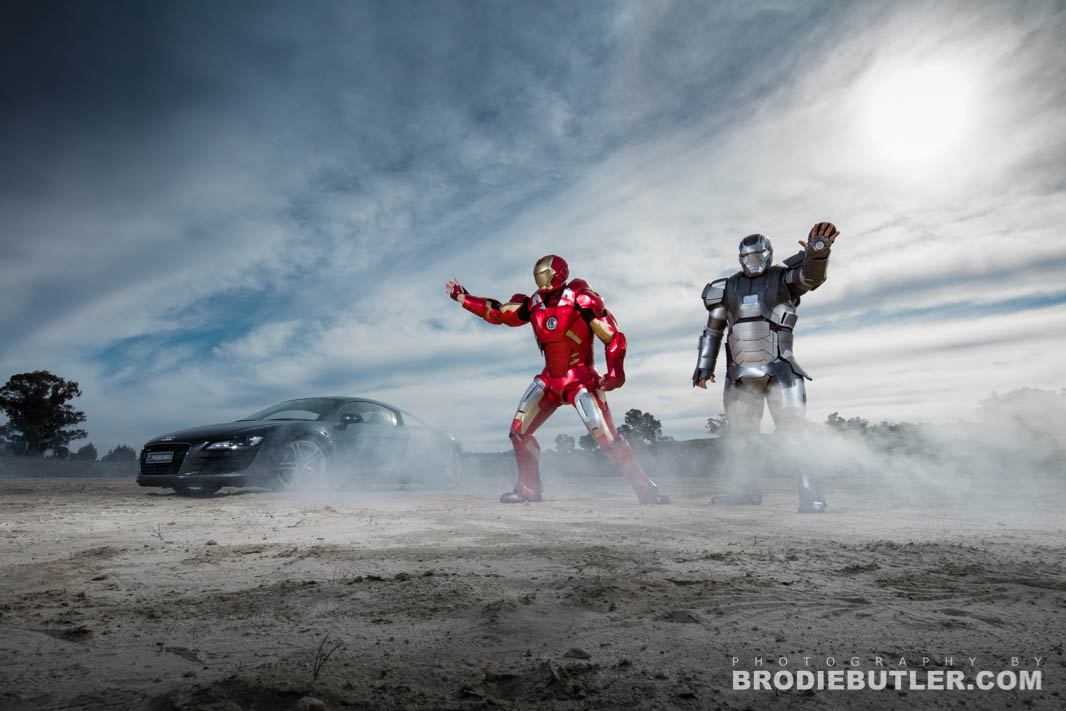 Here’s a basic before/after slide for you to see. Sorry I cant make it any bigger in this post. 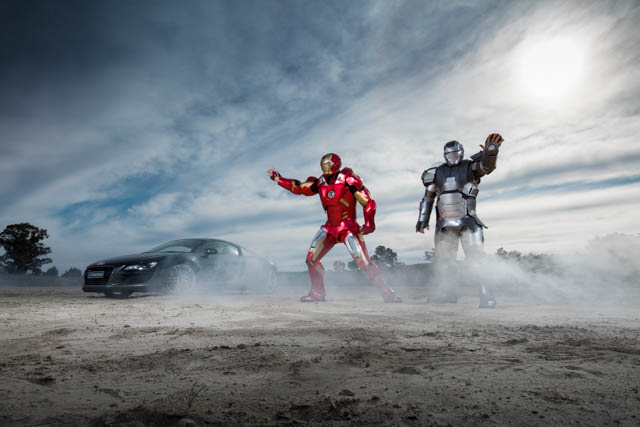 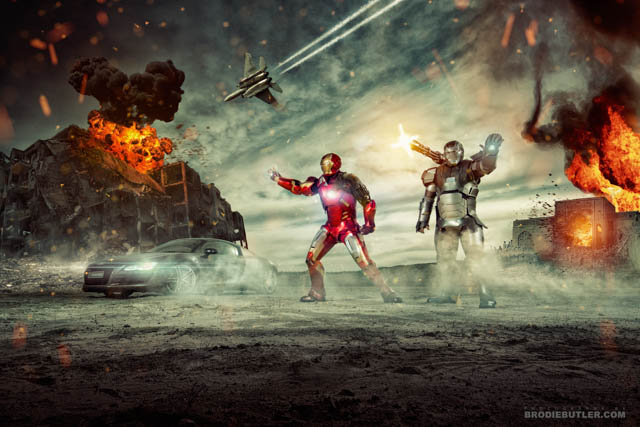 I actually had a smoke machine on set powered by a 2K Honda inverted generator so you can see that the smoke in the frame is all real. Some was still added in post production of course though. I just like to create as much as possible in camera and I love playing with smoke as tricky as it can be. The lighting setup was kept very simple with all hard light. By hard light I mean bare reflectors were used. There were no softboxes. This was partially because we were up against the harsh sun and needed as much power as we could get, but mostly it was a creative decision. I wanted to build hard contrast in the suits. We didnt want soft light filling in all the shadows which is what would happen from a big softbox. These suits are metallic and i wanted them to look tough. So two Elinchrom heads powered by an Elinchrom ranger were used to light Ironman and War Machine from the left and right of camera. A Canon Speedlight was used to light the front end of the car a little bit, and the bright sun was our big bright backlight of the whole scene. Below you can see a standard shot without any lights, and another duo shot of the two with a couple of the lights setup. 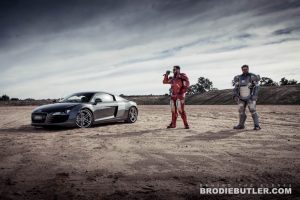 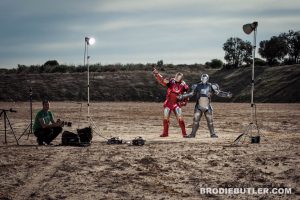 Obviously this was a large photoshop effort. Photoshop pretty much IS the game these days. So I have created a 2 minute speed retouching video. This is where I record the computer screen as I work on the image and then play it back at high speed so you can see the whole entire retouching process in a short period of time. You can’t learn how I did every little thing, but it does give a lot of good insight into its creation and the process and it can be interesting to watch. These videos certainly seem to be quite popular on the internet from other retouchers.  I spent roughly about 4-5 hours on and off on this image. I kept re-visiting it to add more finishing touches and I did a bit of experimenting too which can take a bit of time up.

The approach I took with this image is a little bit muddled up because I don’t usually expect to re-visit an image 2 or 3 times. So I have done a lot of things out of order to how I would normally work. For examle I would usually wait until the end to add all the overall colour grading effects and sharpening, and I would usually clean out unwanted objects at the start before adding additional elements. So don’t look into why I have done things in any particular order, there was no real reason. This was a fun project for me so there was no real brief, I just had some fun and played around and this is how I did it:

Big thanks to John Elliot (Ironman) and Ryan Burnell (War Machine) for taking some time out from saving the world to come hang with me and my trusty assistant Tim Kershaw for the day. Thanks again to Canon Australia for the camera and if you want to giv ethe 5DS or the 5DSR a go for yourself, give Camera Electronic a call on 1300 790 230.

If you want to see more from this actual photoshoot, there is a bit of behind the scenes footage in my Canon 5DSR BTS Video thanks to Tim Kershaw, which you can watch in a recent blog post I made right here:

Behind the scenes video with the Canon 5DSR